To ensure the proper performance of a W-Beam safety barrier, all installations should be terminated with appropriate end-treatments. Guardrail end treatments not only ensure that the end-rail does not spear the vehicle in the event of an impact with the terminal, it anchors the guardrail system, providing lateral and longitudinal support for the barriers Length of Need. The introduction of tensile and flexural strength into the guardrail system, allows vehicles to be re-directed effectively when impacting the Length of Need.

Used in Victoria & Tasmania, the BCTA (Approach) and BCTB (Departure) Terminals are a cost-effective solution for terminating W-Beam Guardrail installations. These terminals provide a soft gating impact to prevent the end rail from spearing an impacting vehicle.

The BCTA is installed on an offset with breakaway posts to minimise the potential for vehicle penetration.

The BCTB terminal is used on the departure side of an installation, outside the clear zone of opposing traffic. It is used to anchor the guardrail system and is not considered a crash-worthy terminal for head-on impacts.

The BCTA and BCTB Terminals are “deemed to comply” system. 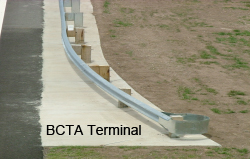 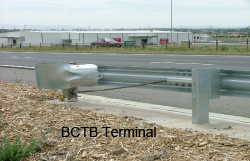 Like the BCTA Terminal, the Modified Eccentric Loader Terminal (MELT) is designed to provide a soft gating impact to prevent the end rail from spearing an impacting vehicle. The MELT terminal is installed on an offset with rails resting on a shelf-angle to minimise the potential for vehicle penetration. Diaphragms are installed into the bullnose section to help it retain its shape in the event of an impact.

Trailing Terminals are installed on the downstream end of roadside barriers that are not subject to head-on impacts. Once again, the purpose of this terminal is to provide longitudinal support for the safety barrier by anchoring the system.

The MELT Terminal and Trailing Terminals are “deemed to comply” system. 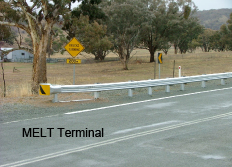 Tangential End Terminals are the latest innovation in Guardrail End Treatments. They have the advantage of being fully crash tested systems (Test Level 2 & 3) and can be installed in line with the W-Beam barrier or on a flare. They provide effective solutions for applications where there is insufficient space for a flared end terminal or when it is cost prohibitive to extend the embankment to accommodate a flared system.

These terminals are designed to reduce the problems associated with impacting vehicles, such as spearing, vaulting and rollover. They are re-directive gating terminals that need a run-out area behind them.

The ET2000 Plus is engineered to absorb the kinetic energy of an impacting vehicle. This is accomplished by flattening the W-Beam Rail as it passes through the Extruder Head. 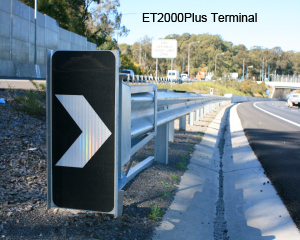 Barrier Designs is a Victorian based company that specialises in providing innovative solutions for all your safety barrier needs.